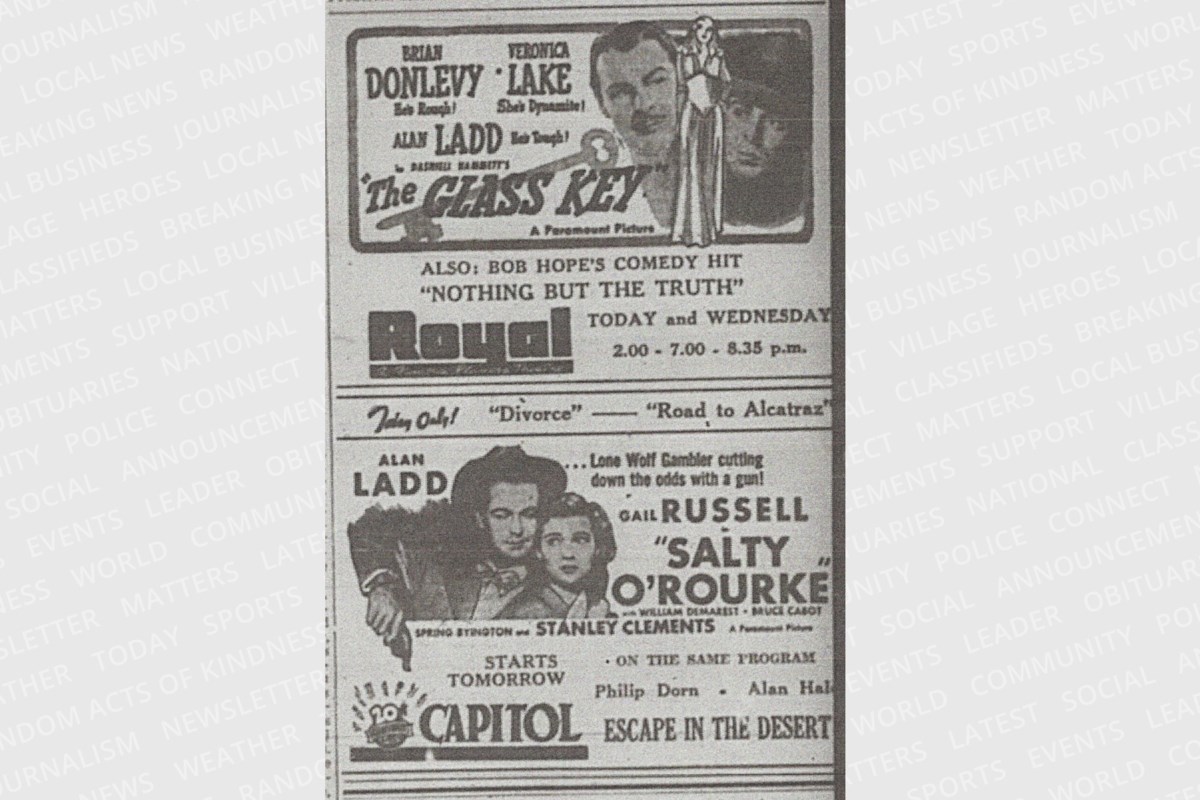 In the months following the end of the Second World War in 1945, the people of Guelph – like Canadians across the country – were trying to “get back to normal” in a world that had been irrevocably changed.

Industry had to abandon war production to meet domestic needs that were not quite the same as in 1939. Soldiers returning from military theaters around the world had lost their youthful innocence. Women want greater recognition as citizens and as members of the labor force. And people who saw themselves as guardians of social mores wanted to go back.

One of their first areas of concern was the cinema, where they felt regulations regarding “decent” opening hours had slipped during the war years.

The newspaper article explained that the city council had decided to end the screening of films at midnight in Guelph cinemas. It read: “…every theater and cinema show in the city must remain closed from 11:55 p.m. (midnight) until 8 a.m. the next weekday morning, except December 24 and 31 when those days do. does not fall on a Sunday, or when special permission is expressly granted.

It wasn’t the films themselves that drew disapproval from the city council. That week, Guelph moviegoers were treated to a crime drama titled The glass key with Alan Ladd, Veronica Lake and Brian Donlevy at the Royal; Salty O’Rourke, also a crime drama, starring Gail Russell and Alan Ladd (obviously a busy actor) on Capitol Hill; and a murder mystery called The Strange Case of Uncle Harry with George Sanders, Geraldine Fitzgerald and Ella Raines at the Palace.

What the city council objected to was the showing of films at a late hour when respectable, hard-working people should be at home in bed. They also didn’t want the movies to start airing on Saturday nights at a time that would postpone them to Sunday morning, which would technically make them in violation of the Sunday Law.

According to Mercury, many Guelph residents had signed a petition demanding tighter regulations on the hours of operation of barbershops and beauty salons. City Council has passed a resolution to review the hours of operation of these female vanity haunts at a later date. Meanwhile, in a pragmatic act of social responsibility, it passed a regulation that required owners and employees of such businesses to be licensed.

Beauty salons and hairdressers should also adhere to established health standards and submit to inspections by health workers and doctors. No one complained that this public health measure was a tyrannical attack on their democratic rights.

City Council also addressed an issue brought to the attention of the Finance Committee. He came to the decision “that no more dancing will be given in the auditorium of the town hall and that the town attorney be instructed to modify the present by-law accordingly; and also change the by-law so that the auditorium at City Hall is only rented upon request to City Council.

Apparently the time had come for the town hall to drop the role of hosting these dances which had been so popular during the war.

While some issues were dealt with at the municipal level, another law was being prepared in Ottawa. The House of Commons proceeded to the first reading of a Bill introduced by Wellington South Liberal Representative RW Gladstone MP. The bill would ban “pointing guns” scenes from magazine covers.

At that time, detective magazines – including comic books – were considered a bad influence by educators, clergy and many parents. They were hugely popular, especially with teenagers, but critics dismissed them as cheap trash that sensationalizes violence. Gladstone’s bill would be an addition to Section 124 of the Criminal Code, which made it an offense to point a firearm or air pistol at a person without a legitimate reason.

Karl Homuth, the Progressive Conservative MP for Waterloo South, asked: “You’re not going to get rid of Superman, are you?

Gladstone didn’t explain that Superman didn’t carry a gun and didn’t have to worry about someone pointing one at him. However, he explained: ‘It is utterly wrong and prejudicial to the morals of young boys that they should continue to be allowed to observe and study on magazine covers such…pictures depicting filming scenes which do not can only educate them to think that there is Nothing wrong with pointing a gun at a person… More than one newsagent told me that eliminating gun pointing images would no negative impact on the sale of good crime novels.

Movies and beauty salons, dances and magazines; none escaped the long arm of a city council trying to return the royal city to its pre-war normalcy.

One can only wonder what the councilors might have thought had they known what was happening just around the corner: rock and roll and television with its line-up of armed cops, crooks and cowboys!