Review: Kevin Smith’s ‘Clerks III’ is as funny as a heart attack 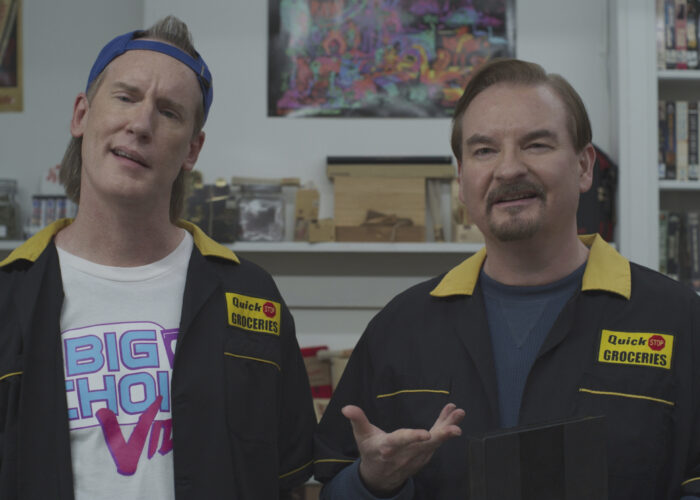 For “Clerks III,” writer-director Kevin Smith returns to the scene of his early success and begins having heart attacks. In doing so, it may have come up with a new definition for one sequel too many: if your main characters have advanced to the point that they’re old enough for a coronary, it might be more lenient to spare them the strain.

Smith rose to fame in 1994 for creating the original “Clerks”, about people working in a convenience store. In 2006, it made a sequel, and there were also spin-off films, TV specials, and “Clerks” animations. Obviously, it’s a pit that Smith likes to revisit, but the pit is dry, which makes “Clerks III” self-referential, depressing, and completely dead.

Yet devotees of the “Clerks” can find something there, all six or seven of them. But they probably don’t need to see it. They are all in the movie.

It’s decades later, and Dante (Brian O’Halloran) and Randal (Jeff Anderson) still work at the same Quick Stop, only now they own the place. Dante is sad, because he would like a more exciting life and because his wife (played by Rosario Dawson, who appears in dream sequences) was killed by a drunk driver in 2006. Meanwhile, Randal is still as unleashed, until the day when, in the middle of a conversation, he realizes that he has trouble breathing.

In a way, Randal’s medical emergency is the best part of the movie, in that something actually happens. Randal is rushed to the ER and asks if he had a heart attack. The doctor (Amy Sedaris) responds, “No, you’re having a heart attack” and uses a stent to open up a completely blocked artery – the one known as “the widow”. Suddenly he can breathe again.

Smith himself had a heart attack in 2018, caused by the same blocked artery, so it’s interesting to watch the ER scene and know you’re seeing a fictionalized rendering of an actual experience. Alas, this is the first and last event of any interest in “Clerks III”.

When Randal leaves the hospital, guess what he decides to do? He decides to make a film about working in a convenience store. He wants to shoot it in black and white, just like “Clerks”, and he thinks he can do it for $27,000. So much of “Clerks III” features characters making a movie very much like the original “Clerks” except this is a universe that “Clerks” was never made in, it so it’s about time someone did it.

Jokes, often Smith’s forte, are dumb, boring, mostly obsessive conversations about minor “Star Wars” characters and other aspects of pop culture. That’s probably not Smith’s intention, but you end up feeling sorry for the characters, that they inhabit such a small mindscape.

So here we are: dialogue can’t save “Clerks III” — dialogue is part of the problem — and the plot is irrelevant. Audiences are never made to worry about whether Randal’s film will get made. It can’t convince us that Smith even thinks we should care.

As Dante, Brian O’Halloran invests a lot of emotion in the scenes with his late wife (Dawson), with a great emotional performance that sounds like Ingmar Bergman passing through New Jersey. But his very real effort is worth nothing because the film is worth nothing. “Clerks III” is worth avoiding.