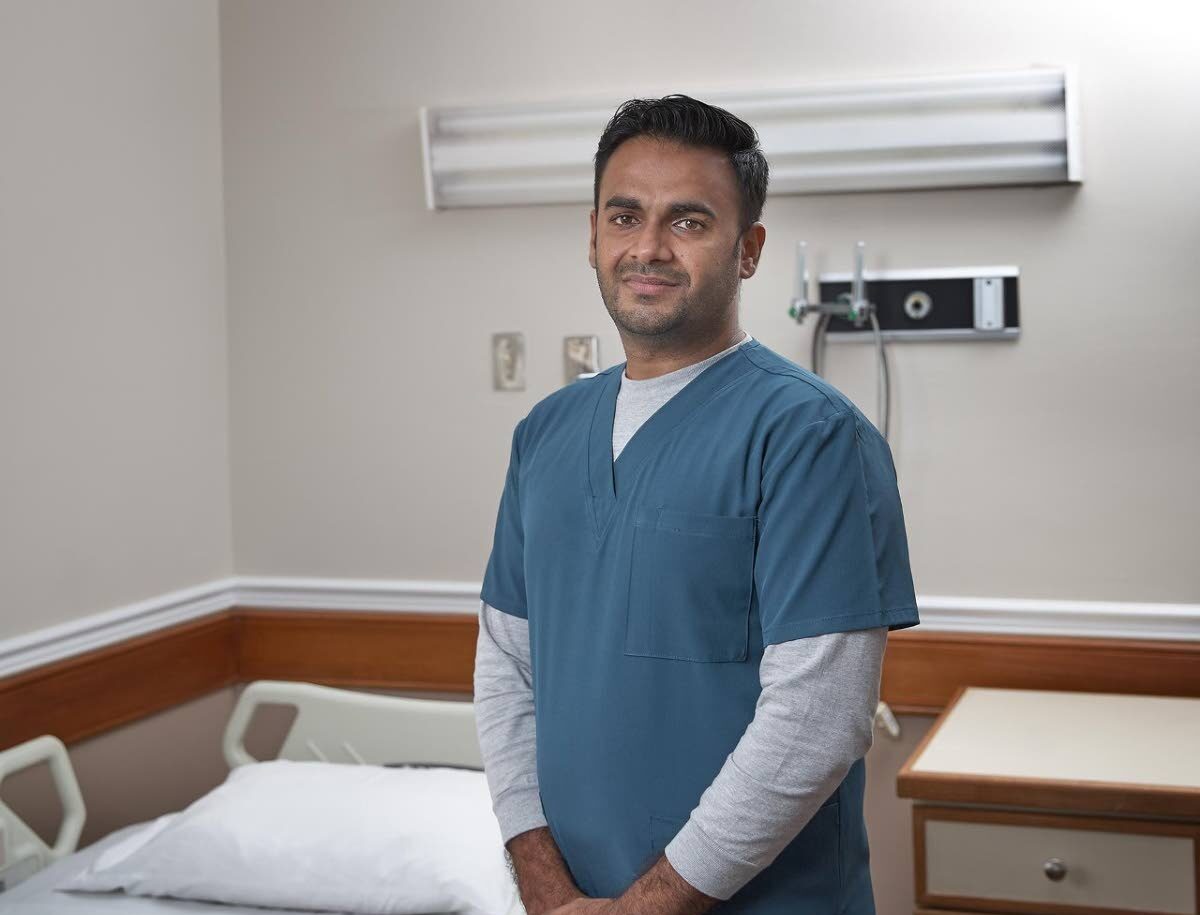 AS TOLD TO BC PIRES

My name is Renard Teelucksingh and I am the third male midwife in Trinidad and Tobago.

I come from the deep south. Cedros is where I grew up. I’m happy to hear that I’m the first Trini to the Bone from there.

I went to elementary school in Cedros and high school in Point Fortin, half an hour from my house.

It wasn’t until I started college that I left Cedros. And I came to St Augustine, where I’ve been living ever since.

Even in Cedros, I wasn’t one to go out to party or go to bars. I was still at home. Or I would probably do some gardening, which I started at a young age. Even until today, I still do vegetable gardening, ornamental plants, things like that.

I probably got that from my mom, being by her side as she pruned and watered her whole lot of bougainvillea on the porch.

Right now I have a forest outside of my home in St Augustine.

My father is still with us, but my mother passed away in 2010.

I am the middle of three siblings, a brother four years older than him and a sister one year younger. I accept BC Pires proposal that I don’t have middle child syndrome because I was the little boy. Not a second son.
And I was spoiled by my mother!

But I had to work harder to get my parents’ attention. For example, none of my siblings garden at all.

At the moment, I am not involved with anyone.

Above all, my career is what I focus on. I want to be able to provide for my family if and when I have one.

I was one of the last five standard classes to take the Common Entrance Examination at Cedros Government Primary School. I did CXC and A-Levels at Point Fortin Senior Secondary.

I liked school most of the time. And me
still loved science.

I did a year of natural sciences at UWI and then transferred to nursing at COSTAATT.

From the beginning, as far as I can remember, I remember that I wanted to be in the medical field. It’s the only thing I saw myself (adult) doing when I was a kid.

I failed to get into medical school to become a doctor, so the best thing to do was to be a nurse.

But I am
not
a frustrated doctor.

I believe, as my mother said, that things happen for a reason and nursing and midwifery was meant to be my path in life.

I am a believer. I was raised Hindu by my father’s father, but when he passed away when I was about nine or ten years old, we stopped following the Hindu tradition, although we still celebrated Divali.

I don’t remember why my mom sent us to church one morning, but every Sunday after that we kept going. And I just realized that what was going on in church was where I wanted to go.

I was baptized a Presbyterian in 2010 when my mother passed away.

If BC Pires challenges me to reconcile a benevolent and omnipotent God with all the suffering he clearly allows, I cannot.

My belief is based on my personal life, the things I had to overcome. I needed this avenue to turn to.

But I have the same questions: if there is a God, why are people being murdered every day? I am a midwife. If God exists, why do babies die?

Where I live in Cedros, my backyard is the ocean. You hear the waves crashing all the time.

It’s only when you’re out of it that you realize how much you miss it.

The only thing to do in Cedros is to go to the beach. I spent most of my time there outside of school, playing football, learning to swim, trying to fish.

I am a proud country boy and was unaccustomed to city life. It was not an easy transition to come to live in St Augustine and work in Port of Spain and El Socorro.

In Cedros when it’s dark, you’re still outside. You on the porch.

Here, once it gets dark, we lock ourselves inside. It was a big shock for me.

If I could manage, I would work in a hospital by the sea.

And it would also help my patients recover. Getting out of that hospital environment, the smells of the hospital room, that sort of thing.

I did English literature at CXC, but I’m not a reader. That’s the only thing I didn’t like about school. I read
if
I must.

I did To Kill a Mockingbird, an excellent book and one of the few I’ve read. I don’t remember Shakespeare’s book.

Of
Classes
I’m a Game of Thrones fan! As well as everything medical. Grey’s Anatomy was a major thing.

On the cinema side, everything that is exciting, horrors. I’m a huge Harry Potter fan. Movies. I started the books but couldn’t keep up.

A simple thing like saying hello when you walk into a room. Young people don’t do that anymore.

In an emergency, doctors are important, but you really need nurses.

Doctors come in and out. We spend 98% of the time with the patients.

I went through the challenging program to become a registered nurse from 2009 to 2014, class time and practical aspects. You must pass a practical exam before your written exam.

But as a general nurse, you are not trained to deliver babies or take care of women’s health.

I started working in the private sector in the accident and emergency field for six years.

I got tired of it. I needed to do something else.

And then they started accepting men into the midwifery program. I thought this would make me a versatile nurse, let me try.

I have delivered over 70 babies in hospital and three home deliveries.

When that first home birth went well, I thought: this is so amazing: a woman can have her baby at home in the comfort of her own bed! Where she doesn’t have to wait to see the baby and the baby can stay with her full time!

We need to do
a lot more of that in Trinidad.

I think we are only three male midwives. It may sound cliché but I wanted to help break that stigma. I want to be a role model for other men who want to become nurses but are afraid of this stigma that only women can be midwives.

The best thing about being a midwife is delivering that baby to her mother. Being in the presence of someone who is being born into this world and knowing that I am the first person this new baby is going to meet, I cannot describe the feeling!

Just recently parents sent me pictures of my home births now starting school! There is no feeling like that in life.

The bad thing is that you will have babies that will die. That’s not nice.

Fortunately, I only lost one baby. And that was one too many for me.

A Trini is very durable. No matter where they go in this world or what position they find themselves in, they don’t give up. And they do.

Besides being my home, Trinidad and Tobago is a place where no matter the state of the country, every creed and race can unite as a person and all are welcome.

I grew up loving everyone, all cultures, all religions.

My Muslim friends light deyas in Divali, my Hindu friends eat goat curry in Eid. And Christians do both.

I don’t believe there is any other place in the world where this can happen.

Read the full version of this feature Friday night at www.BCPires.com