Eye Institute staff pose for a group photo with the Marshalls’ patients and their families.

April 22, 2022 | The morning of Saturday April 9 was sunny and Barmej Tibies had to wear special dark sunglasses to protect his healing eyes. But she felt like a movie star.

Tibies and five other Marshallese patients from northwest Arkansas underwent cataract surgeries April 8 as part of UAMS Harvey & Bernice Jones Eye Institute’s second “Gift of Sight” event in as many years . Surgeries, transportation and food were provided free of charge to patients, thanks to generous Eye Institute donors who contributed to a fund for this cause. Many patients were also covered by Medicaid.

Patients were thrilled to see clearly again for the first time in years. Tibies has some catching up to do: she has nine children and nearly 40 grandchildren to visit. 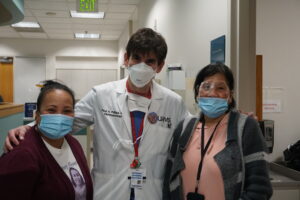 “Usually I don’t go anywhere and do nothing, just stay at home,” she said through an interpreter. “I see much better now. I will be able to read my Bible more easily and better manage my health and my diabetes.

Northwest Arkansas is home to the largest Marshallese population in the continental United States after many citizens of the Marshall Islands emigrated to the United States, beginning in the 1950s. Their legal migration took place after the states United States detonated more than 65 experimental nuclear bombs which destroyed some of its islands and ecosystems.

“Thanks to generous donors, we were able to perform cataract surgeries on 21 patients last year at no cost to the patient,” said Paul Phillips, MD, director of the Eye Institute and chair of the department. of Ophthalmology from UAMS in the College of Medicine. “However, with a population of approximately 14,000 Marshallese in northwest Arkansas, we knew there were more patients who needed treatment.”

A cataract causes the lens of the eye to cloud, eventually leading to vision problems or blindness. Cataract surgery removes the cloudy lens and usually replaces it with a clear, artificial lens. The surgery typically takes just under 30 minutes but costs thousands of dollars without insurance, Phillips said. 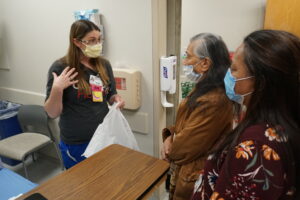 UAMS provided transportation from northwest Arkansas to Little Rock for the patients, who arrived April 8 for pre-operative checkups, followed by cataract surgery. They spent the night in provided accommodation before returning on Saturday morning April 9 for postoperative examinations.

“In this case, if these patients don’t come here, the surgeries don’t get done — that’s why they’ve tolerated this for years and years,” Phillips said.

The inability to see or see clearly had greatly affected their quality of life, but not anymore. After the surgeries, the patients shared how their lives had improved.

Tony Lmooth had difficulty standing due to poor sight in his right eye. “He only saw with his left side, that was all,” said his grandson, Orlando Lmooth. Although some of the Marshallese patients had been to UAMS for their second operation, it was Lmooth’s first.

After the operation, he was surprised to see letters and pictures immediately. “Now that I can see, I can grab things off the shelves and know what my medications are,” Lmooth said.

Loreenn Turinto, 80, can now see clearly with both eyes after her second surgery in two years. Before, her cataracts were so severe that she couldn’t see the words when she tried to read. “I’m very happy,” she said. “Now I can see, I can walk, go to church – things I’ve never done.” 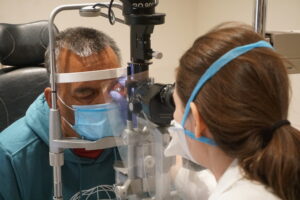 “We see cataract surgery as a case of daily bread, but there are people who are actually blind from cataracts, which just shouldn’t happen because it’s a treatable cause of blindness” , Broyles said. “I think it’s much better when you’re able to help someone who’s completely lost their independence from something like a cataract – and within a day they can get it back.” 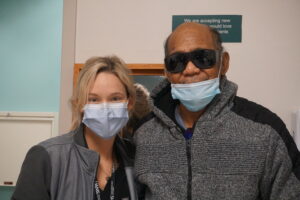 Heather Broyles, DO (left) with patient Tony Lmooth (right). Lmooth was able to immediately see pictures and photos the day after her surgery.Benjamin Waldrum

The six patients will return to the Eye Institute in a month for follow-up exams. Phillips said he hopes to bring in many more patients for these surgeries.

“The goal of this cycle was to establish a process that we can continue with additional patients every two months, and there will be more group cataract surgeries like these in the future to support additional patients,” Phillips said.

When the patients, their friends and family members gathered in the lobby of the Eye Institute to say goodbye, they insisted on giving something back to the doctors who saved their sight. So they stood together and sang, harmonizing together and clapping to the beat.

“There’s not much else you can do in medicine that has such a great reward immediately after like this,” Henry said. “It’s unique to ophthalmology, and that’s one of the main reasons I chose this field.”