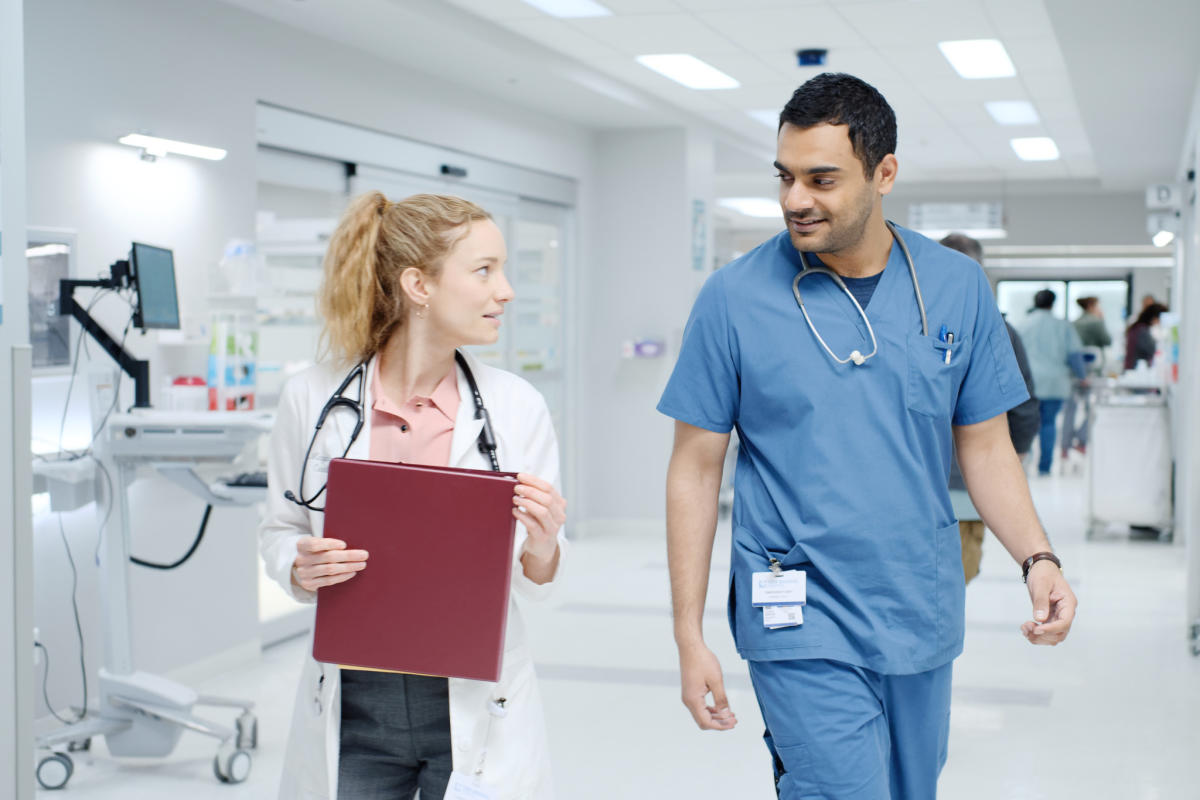 The award-winning Canadian medical drama Transplant is back for Season 3 (Fridays at 9:00 p.m. ET/PT on CTV), and one of the happiest moments of the season premiere is seeing Bashir “Bash” (Hamza Haq) and Magalie “Mags” (Laurence Leboeuf), finally taking their relationship to the next level.

“Obviously the audience could see it and the writers could telegraph it, … there was a kind of hesitation between them,” Hamza Haq said. Yahoo Canada. “She wasn’t willing to take the leap after that hug in Season 1, and then halfway through Season 2, Bashir turned her down.”

For Haq, one of the highlights of Season 3 was having the opportunity to explore the “personal side” of Bash.

“This season, we’re seeing Bashir’s personal side a bit more because he’s been so stuck trying to prove himself on the job and relying on those guarantees from Dr. [Jed] Bishop, … and dealing with the bureaucratic nature of the medical system in Canada,” Haq said. “When he’s freed up a bit at the end of Season 2, he has the opportunity to express himself in a way that we’ve never seen before, both personally and professionally.”

“There’s a bit more emphasis on where you are right now. There have been so many [focus] about everything that people have been through and about establishing these characters and their storylines, … and there’s an immediacy to the season, … there’s not as much focus on the past.

As soon as Transplant arrived on our television screens in 2020, it quickly found success not only in Canada, but internationally, including being embraced by the coveted American audience. What really sets this show apart is how it taps into the medical drama formula that we love, but we get to see these stories through the eyes of a talented doctor who fled to Canada as a refugee from Syria.

It is centered on this refugee story, which [creator] Joseph Kay…has often said, and I’ve repeated this line, that there’s a character that exists on every show, usually just as a supporting character, as a guest character, but this is the first time that we’re going home with them, it’s the first time we’ve really spotlighted someone who comes from this kind of experienceHamza Haq

An example of how Transplant excels at both executing the construction of medical drama and telling a solid refugee story, begins season 3, when Bash begins the process of applying for Canadian citizenship. He ends up talking to a woman who had been in Canada for 20 years before applying for citizenship. When Bash asks what took her so long, she responds by saying she raised a family in Canada and is “totally assimilated”, but being physically at the office waiting to take her citizenship test reminds her that she is not.

Haq himself remembers the process of becoming a Canadian citizen, personally relating to the conversation Bash has in this scene.

“My parents immigrated, I took the oath and got my Canadian citizenship when I was 13,” Haq explained. “It’s such a weird and beautiful thing, when you have to leave your home country for whatever reason, you’re inherently trying to find acceptance, and no matter how much you get or don’t get, you don’t. never really feel like you belong.”

“There’s something about it where you just feel like you don’t belong because another place is your home, but now it’s your home, and being stuck between those two worlds is something I know very well. It’s something that the writers and our consultants were able to lend their voices to on such a personal level.”

For Hamza Haq personally, having embodied the character of Bash for three seasons now, there are certain elements, such as medical jargon, which become like a second language for him. Additionally, certain elements of his character’s development are identified as reflecting his own life.

“I think in terms of Bashir’s evolution, … it’s funny how art imitates life, and vice versa,” Haq said. “There’s a call to action this season where Bash needs to take care of himself more than ever, he’s worked so hard to maintain his status, his reputation as a good doctor and his personal life is finally taking a hit.”

“It’s something I can totally relate to…I take my job very seriously, I haven’t taken a vacation in 12 years…I really prioritized to do the work, to the detriment of what I do’ I don’t take the time to take care of myself. I really don’t, and that’s something that has changed this year where I’m still not very good, but I’m aware of the importance of this and I’m taking the necessary steps to maybe put less pressure on myself… I think learning to take care of Bashir taught me to take better care of myself, and I am really grateful.